On the necessity for deliberate practice of foundational writing skills in classrooms.

“The idea behind progressive mastery is to protect students from what confuses them until they have mastered each individual component.”

Connect this to what I wrote about Hochman’s writing method.

Air pollution is damaging our nation’s children in the one place they spend some of the most time in and should be most protected in — our schools.

A critically important piece from The Center for Public Integrity on the invisible–and thus largely ignored–health risk of air pollution. Many schools, especially here in NYC, are built right next to busy roadways. The long-term health costs are incalculable, and all it would take would be a high grade air filter that can remove 90 percent of the pollution. And forcing old diesel trucks off of our roads. This may sound like a pipe dream, but California has already led the way.

“The technology is well established, the installation is straightforward and the maintenance is simple,” said district spokesman Sam Atwood, who doesn’t recall officials from other states getting in touch to learn from his agency’s experience.

As in the office, so in the classroom. Empower students to design their spaces.

“When workers were empowered to design their own space, they had fun and worked hard and accurately, producing 30 per cent more work than in the minimalist office and 15 per cent more than in the decorated office. When workers were deliberately disempowered, their work suffered and of course, they hated it. “I wanted to hit you,” one participant later admitted to an experimenter.”

A special education teacher discovers the power in scheduling for effective collaboration.

An important ProPublica piece on the hit and miss nature of many medicinal and surgical interventions. Most will do no harm —a few may gain benefit—and some will be harmed. There’s some parallels to consider with education here.

“If we really wanted to make a big impact on a large number of people. . . we’d be doing a lot more diet and exercise and lifestyle stuff.”

“while vouchers and charters are often grouped under the umbrella of ‘school choice,’ the best charters tend to be nonprofit public schools, open to all and accountable to public authorities. The less ‘private’ that school choice programs are, the better they seem to work.”

Interactional motivational scaffolds are more effective than other scaffolds. 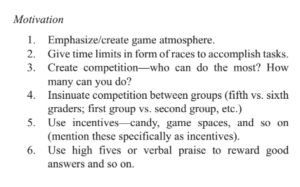 Need to remember something? Use weird visual cues to trigger your memory. Classroom teachers, take heed.

We blame a lot of problems on immigrants. But maybe it’s time to point the finger at the “longstanding native-born Americans” as the real source of the problem.

Daniel Kahneman comments on a blog post. The world changes.

Kahneman responds to a blog post, noting that he was overzealous in his interpretation of studies on social priming. This is important not only as an encapsulation of the “replication crisis,” but furthermore for those of us who have read and been heavily influenced by Thinking Fast and Slow.