Goldhagen is an architecture critic and the author of the new book “Welcome to Your World: How the Built Environment Shapes Our Lives.” In it, she argues that buildings affect us in ways that go deeper than even most architects realize. They also provide windows into the minds that conceived them. “What can you learn about Trump from Trump’s aesthetics?” she asked. “Quite a lot.”

—Sarah William Goldhagen, in “THE PSYCHOLOGICAL INSIGHTS OF TRUMP TOWER“, The New Yorker by David Owen

Like Loading...
I’m playing around with the formatting of these weekly roundups. Let me know what works or doesn’t work for you. UPDATE: looks like links in pictures weren’t working, so I added embedded links to each article.

A nice overview of the relationship between architectural design and well-being from The Guardian’s Cities.

“One, two, three, four!” they counted in Finnish. (For good measure, I jumped into the ditch, too.) The teacher, Pelo, explained that this experience represented how she and the two aides aspire to teach the kindergartners in the woods. She described this approach as “secret” learning, when children are unaware that they’re learning academic content. In the forest, these Finnish educators might lead the children to find sticks of varying lengths and organize them from shortest to longest, form letters out of natural materials, or count mushrooms.

It’s likely that as long as humans and their institutions hold prejudices and bias, their designs will reflect them. But some progress is possible. Two decades ago architect Ronald Mace imagined a new standard, in which anything humans make — a new piece of technology, a public park, a household product — is usable by everyone. He called this idea “universal design.” Today it’s an enforceable legal standard in Norway. One way to help us get there? Make sure the design process itself is also accessible to all.

“All of the choice-based reform efforts that they’ve come up with over the last 20 years have been designed to bring back all the white people who left after Brown v. Board. But the irony is that, if [districts] keep relying on choice, they’re going to be set up for failure because white people will not enroll their children in schools unless they’re already [predominantly] white,” said Natalie Hopkinson, a black parent and journalist, referring to extensive research showing privileged, white parents tend to send their kids to schools that they perceive as “high status.” “So the segregation keeps repeating itself as long as you rely on choice as a way to make the change.”

In the Philadelphia school district, 37 percent of the system’s 144,000 are chronically absent. Among high-school students, the figure shoots up to 51 percent. The districts in Baltimore and Milwaukee have similar numbers. For Cleveland and Detroit, the chronic absenteeism rates are around 50 percent, and more than 60 percent of Cleveland’s high-schoolers missed more than three weeks of school a year.

The report’s authors write that one common denominator linking these cities is the “nearly 100 years of historical actions that aimed to segregate African American populations in sections of the city with the poorest housing, greatest proximity to industrial pollutants, greatest exposure to violence, and highest unemployment rates, resulting in widespread inter-generational poverty.”

“Students need to be in classrooms that inspire them—spaces that are light, airy, and filled with examples of work that they aspire to do. Each school will have a variety of spacious classroom settings. Some will be more traditional in the way that we envision classrooms now, but others might be set up outside or within an atrium or amphitheater. There might be desks, cushions, or benches arranged in rows or circles—however the teachers want them, as not every classroom will follow a template. Each classroom will be set up based on what is necessary to meet learning objectives. But schools will prioritize configuring classes to inspire learning first and foremost, and, where appropriate, reflect the diversity of environments that students are exposed to outside a school setting. Students will have beautiful spaces that make them feel good to be at school—with art, living plants, music where appropriate, comfortable seating, and fast internet access.” [Bold added]

—Rita Pin Ahrens, the director of education policy for the Southeast Asia Resource Action Center, in an article on The Atlantic, “Reimagining the Modern Classroom“ 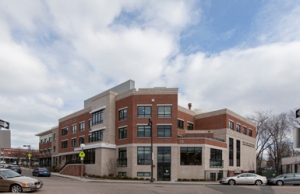 A “high level of student engagement may be at least partially due to the school’s new Lithgow Building, which opened last August. The historic building was renovated with a trauma-informed design that houses the school’s lower and middle grades. “In many elementary schools, people use bright primary colors,” says Codman’s executive director Meg Campbell. “But for kids who’ve been traumatized or on the autism spectrum, red can be a trigger.”

. . . Campbell says she has seen a dramatic improvement in students’ behavior following the Lithgow renovation, even with the addition of 44 more students this school year.“Last year we had 16 students with 50 different incidents that warranted a suspension,” Campbell says. “This year to date, we’ve had three students with six incidents warranting suspension to date. If you put kids in a different environment, the behavior changes, and the teachers are happier.” [Bold added]